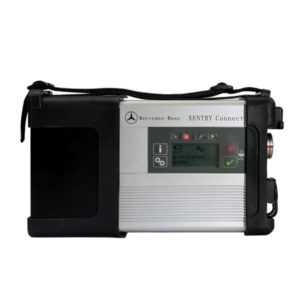 What’s new? & what is updated, compared with sdconnect c4?

1 This SDconnect C5 is the real version with HQ PCB like the original, not the cheap one made by SD connect PCB.

3 has an Ethernet switch, which switches the TCP/IP messages in the event of DoIP diagnosis to the vehicle side.

4 has a qualitative improvement in hardware and software by authorization of diagnostic interface to control the software.

Software: All Mercedes diagnostic software 2017.9 is loaded into the Xentry Connect multiplexer itself.

The licensing system is reworked – now licenses are stored on MB servers – Any license changes are tracked by the multiplexer when connected to the Internet network.

5 at a lower price: the 1:1 clone of the original C5 is much more cheaper than that from the ACTIA Company

Undoubtedly, the original c5 with Panasonic tablet from the ACTIA Company is excellent … But … Its price is disheartening. The cost of the Japanese tablet is realistic to buy pieces of eight new laptops or tablets from other manufacturers.

the fake mb star c5 has nothing update

it is another SDconnect c4 with a different look only

So,  Why you should buy Xentry connect?

After 2015, all Star Diagnosis equipment is no longer supported. First of all, this means that there is no update of the diagnostic data for the newest cars and their systems, as well as the lack of the possibility of coding and programming of electronic units due to the backlog of the software data level in the device, from data in the electronic control units of the car.

So , recommend buying an original Xentry connect and 1:1 clone:http://www.diagobd2.de/wholesale/v20179-original-mercedes-benz-mb-sd-c5-sd-schlieen-kompakte-5-star-diagnose-mit-engineer-software-32650.html(it’s 1095 EUR, the same result as the original), then buy a laptop yourself . the software from which Xentry Connect is managed can be installed without any problems on any computer that has a 32-bit version of Windows 7, Windows 8 or Windows 10. It’s clear with Xentry Connect itself – there’s no alternative .

Already at the end of 2014, at most dealerships, almost all of the previously used Star Diagnosis Compact4 with SDConnect DoIP multiplexers were almost completely removed. Instead, dealers received Xentry Kit kits, which include the latest Xentry Connect multiplexers and Xentry Tab tablets from Panasonic. Tablets are custom-made, although they also have a “civilian” version – the Panasonic Toughbook CF-D1, somewhat inferior in terms of battery life to the original Xentry Tab, but it has a much more powerful configuration.